After some years of working with (and fighting against) Subversion I decided to setup a Git repository for our company. Every developer should decide on their own what Version Control System he wants to use.

Jeremy Skinner wrote an excellent article about hosting a Git repository on Windows which was really helpful. Nevertheless I had to do some customizing.

This drove me crazy: ScriptAliasMatch seemed to work, but the parameter (the repository argument) was not passed to git-http-backend.exe. Instead of this, I saw that Apache/httpd.exe tried to open c:/program files/git/libexec/git-core/git-http-backend.exe/repositoryname.

Solution: You must enable mod_cgi, otherwise the path argument “…exe/$1” can not be resolved.

The git client failed to connect with the virtual host which was secured with SSLv3. I received the error message “error:140920DF:SSL routines:SSL3_GET_SERVER_HELLO:parse tlsext“. Anders Brownworth had this problem too, but I fixed it by disabling SSLv3 – which was at least acceptable in our environment. Use this line in your ssl.conf: 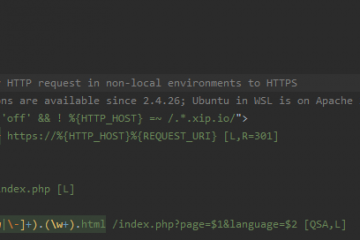 Conditional redirect from HTTP to HTTPS within Apache .htaccess files

Most of the time you are doing local web development without HTTPS and self-signed certificates but good-ol’ plain HTTP. For security and SEO reasons, HTTPS should be enabled in your production environment all the time. Read more…

mod_proxy_connect.so: The specified module could not be found.

Today I wanted to update the Apache configuration in our DMZ to enable Git over SSH over SSL (another story) but while deploying the changes from my workstation to the server, Apache threw the error Read more…